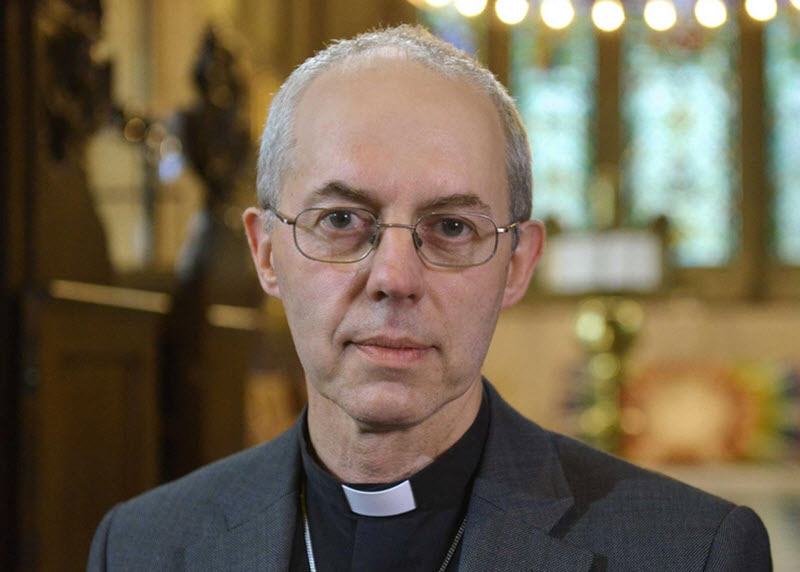 Due to his high public profile, the Archbishop of Canterbury is often asked by the news media to voice his opinion regarding various issues. As a spiritual leader of the Anglican Community, he is often asked to speak on behalf of Anglicans worldwide and Justin Welby has assumed an important role in Anglican ecumenical and interfaith work. Welby is also a highly visible supporter of Anglican consecration of women as bishops.

In 2016, paternity testing revealed that Justin Welby’s biological father was Sir Winston Churchill’s private secretary Sir Anthony Montague Browne (b. 1923), with whom Jane Portal had a short relationship just prior to being married to Gavin Welby on 4 April 1955.

Justin Welby has described his early childhood as “messy”. Both Jane and Gavin were alcoholics and the marriage only lasted until 1959. After the divorce, young Justin was placed in the custody of Gavin. When Justin Welby was 21 years old, Gavin Welby died of alcohol-related causes.

Welby’s mother stopped drinking in 1968, and in 1975 she married first-class cricketer and business executive Charles Williams, who was made a life peer in 1985. Justin Welby describes his stepfather as being supportive of him.

Welby graduated with a Bachelor of Arts degree in history and law in 1978. As per tradition, he was later promoted to Master of Arts by seniority.

Justin Welby worked for 11 years in the oil industry, including five years in France where he was employed by the French oil company Elf Aquitaine. In 1984, he became treasurer of Enterprise Oil PLC where he focused mainly on West African and North Sea projects. In 1989, he left the oil industry, citing a calling from God to be ordained. He was at this point a lay leader at the charismatic evangelical Anglican church of Holy Trinity in Bromptom, London.

On his first attempt to be ordained, Justin Welby was rejected by John Hughes, the Bishop of Kensington, who told him: “There is no place for you in the Church of England.” Welby was later accepted for ordination with the support of the Vicar of Holy Trinity Brompton, Sandy Millar.

Justin Welby studied theology at Cranmer Hall and St John’s College, Durham in 1989 – 1992. He obtained a BA degree and a DipMin, and became an ordained Deacon in 1992. The following year, he was ordained Priest. In 1992 – 1995, Welby was a curate at Chilvers Coton and St Mary the Virgin, Astley (Nuneaton). He then worked as a rector of St James’ Church, Southam, before becoming a vicar of St Michael and All Angels, Ufton, Diocese of Coventry.

In 2002, Welby was appointed a canon residentiary of Coventry Cathedral and the co-director for international ministry at the International Centre for Reconciliation. A few years later, he became the sub-dean and Canon for Reconciliation Ministry, before assuming the role of Dean of Liverpool in December 2007.

In the fall of 2011, Justin Welby was consecrated as a bishop at York Minster and enthroned as Bishop of Durham in Durham Cathedral. “I was astonished to be offered the role”, he explained in an interview with the BBC in 2011. “It is a passionate desire to see a church that is vigorously full of spiritual life, serving Jesus Christ and serving those around it.”

Despite being a bishop for such a short time, Justin Welby was appointed Archbishop of Canterbury in 2012. His confirmation of election ceremony to the See of Canterbury took place at St Paul’s Cathedral on 4 February 2013.

As per tradition, the new archbishop was appointed to the Privy Council of the United Kingdom and Welby swore the oath on 13 March 2013. The following week, he was enthroned Archbishop of Canterbury at Canterbury Cathedral on 21 March 2013. As archbishop he signs himself as + Justin Cantuar.

Justin Welby and his wife Caroline Welby has six children.

The couple has been praised for sending their children to local state schools instead of private schools.

In 1983, their seven-month-old daughter Johanna was killed in a car crash in France. As a result, Welby established an annual service at Coventry Cathedral commemorating the lives of children who have died.

The Archbishop of Canterbury resides in The Old Palace in Canterbury, Kent, England.

Lambeth Palace on the bank of the River Thames, approximately 400 meters south-east of the Palace of Westminster, is the official London residence of the Archbishop of Canterbury.