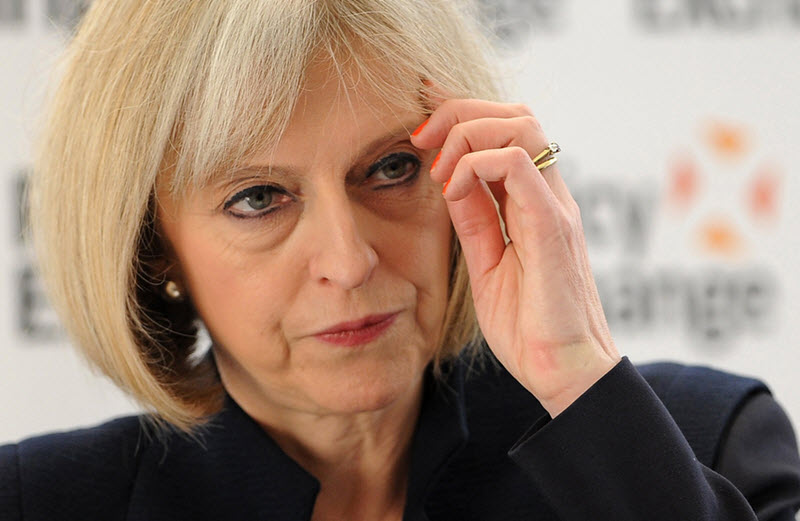 Theresa May became the Prime Minister of the United Kingdom on 13 July 2016. Two days earlier, she had become leader of the UK Conservative Party. Theresa May has been the Member of Parliament (MP) for the Maidenhead constituency since 1997.

After the United Kingdom European Union membership referendum on 23 June 2016, Prime Minister David Cameron – who had campaigned for the UK to stay in the EU – resigned as party leader and prime minister. Theresa May, who at the time held the position of Home Secretary of the United Kingdom, announced her candidacy for the leadership of the party and quickly received notable support. She won the first ballot of Conservative MPs on 5 July by a wide margin. Two days later, she won the votes of 199 MPs. On 11 July, her opponent Andrea Leadsom withdrew from the election, and Theresa May was appointed party leader that same day.

In her first speech as prime minister, Theresa May identified herself as a one-nation conservative and outlined her focus on social justice. Political analysts have also characterized her as a liberal conservative and Christian democrat.

During Theresa’s childhood, the family relocated to the county of Oxfordshire. Initially, her father worked as a vicar of Enstone with Heythrop, followed by a vicar position at St Mary the Virgin in Wheatley. Wheatley is a village located roughly 5 miles east of the city of Oxford.

Theresa Brasier attended Heythrop Primary School and St. Juliana’s Convent School for Girls (in Begbroke), before winning a place at Holton Park Girl’s Grammar School in Wheatley at the age of 13. The primary school and grammar school were state schools, while the convent school was an independent Roman Catholic school.

After graduating from the grammar school – which at that point had been turned into the Wheatly Park Comprehensive School – Theresa Brasier went to nearby University of Oxford where she read geography at St Hugh’s College. In 1977, she graduated with a second class B A degree.

During Theresa Brasier’s childhood and youth, her mother was a staunch supporter of the conservative party while her father avoided taking sides in politics as he wished to refrain from causing dissension in his congregations. In interviews, Theresa has mentioned that she wanted to become a Tory MP from about the age of 12. When she was 14 years old, she went on the campaign trail for the general election. In the following general election, the one in 1974, Theresa Brasier was an active campaigner for the Torys.

In 1980, Theresa Brasier married Philip May in her father’s church St. Mary the Virgin in Wheatley. The couple had gotten to know each other at University of Oxford, after being introduced by Benazir Bhutto, future prime minister of Pakistan.

The year after the wedding, Reverend Hubert Brasier was killed in a car crash while driving to give an Evensong in the village of Forest Hill, just outside Oxford. A few months later, Theresa May lost her mother Zaidee Brasier to multiple sclerosis.

After university, Theresa Brasier started work at the Bank of England in 1977. In 1985, she accepted a position at the Association for Payment Clearing Services, where she would remain until 1997 while also serving as a councilor for Durnsford in Merton, south London.

After two failed attempts to be elected to the House of Commons in 1992 and 1994, respectively, Theresa May became the MP for Maidenhead in the 1997 general election. In 2002 – 2003, she was Chairman of the Conservative Party.

Throughout the 2000s, Theresa May held a number of roles in the Shadow Cabinets. When a coalition government was formed after the 2010 general election, she was appointed Home Secretary and Miniter for Women and Equalities.

During her time as Home Secretary, Theresa May pursued reform of the Police Federation and oversaw both the creation of the National Crime Agency and the introduction of elected Police and Crime Commissioners. She implemented more stringent restrictions on immigration and introduced a harder line on drugs, one that included the banning of khat.

Theresa May is married to Philip May, an investment banker currently working for Capital International. When Theresa May emerged as the only remaining candidate for the Conservative party leadership, his employer issued a statement saying that his current job does not make him responsible for investment decisions: ” He is not involved with, and doesn’t manage, money and is not a portfolio manager. His job is to ensure the clients are happy with the service and that we understand their goals.”

Theresa May has no children.

Theresa May is a member of the Church of England and regularly attends church on Sundays.

Theresa May is a passionate hiker. She has spent many holidays hiking in the Swiss Alps.

Theresa May likes to watch cricket. Geoffrey Boycott is one of her sporting heroes.

Theresa May was diagnosed with type-1 diabetes in 2012.