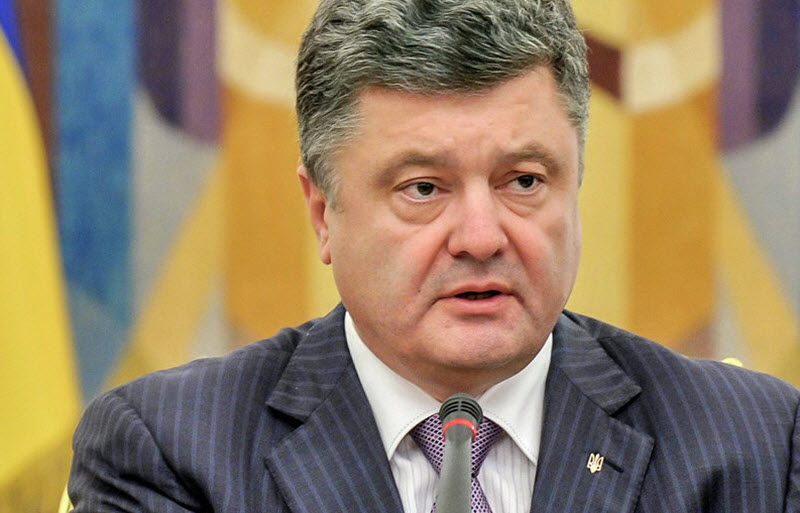 Petro Oleksiyovych Poroshenko ( Петро́ Олексі́йович Пороше́нко) has been the President of Ukraine since 7 June 2014, efter being elected on 25 May that year with more than 54% of the votes in the first round.

Previously, Poroshenko has served as Minister of Foreign Affairs from 2009 to 2010, and as Minister of Trade and Economic Development in 2012. From 2007 to 2012, he was also head of Ukraine’s National Bank’s council.

Poroshenko is nicknamed The Chocolate King, since he built a business empire in the 1990s after a fairly modest start selling cocoa beans. He has long been considered one of the most influential Ukrainan oligarchs. As of May 2015, Bloomberg News estimated his net worth to $720 millions.

In Ukraine, Poroshenko is widely described as a pragmatic politician who wish for Ukraine to become a part of the European Union while still somehow mending its relationship with Russia.

Poroshenko is fluent in Ukrainian, Russian, Romanian and English.

Petro Poroshenko was born in Bolhrad in Odessa Oblast on 26 September 1965. He spent part of his childhood in Bendery in Moldavian SSR, where his father Oleksiy was head of a machine building plant.

The young Petro Poroshenko practiced judo and a Soviet martial art named Sambo, and he was Candidate for Master of Sport of the USSR. In school, he received good grades in the school subjects, but a low grade for behavior.

A fight with four Soviet Army cadets resulted in Petro Poroshenko being sent away to army service in the Kazakh SSR, far away from his family.

Petro Poroshenko started studying at Taras Shevchenko National University of Kyiv in 1982, but it would take until 1989 before he finally obtained his degree in economics from the international relations and law department (subsequently the Institute of International Relations). While still a student, Poroshenko created a legal advisory firm that specialized in helping clients with foreign trade contracts. This eventually led him into becoming a foreign trader himself, selling cocoa beans for chocolate production. During this time, he was the deputy director of the Republic Union of Small Businesses and Entrepreneurs, and the CEO of Exchange House Ukraine”.

In 1993, Petro Poroshenko co-founded the UkrPromInvest Ukrainian Industry and Investment Company. His experience with cocoa beans led him to specialize in confectionery and (eventually) other agricultural processing industries. UkrPromInvest was also active in the automotive sector, with several of the co-founders coming from the Road Traffic Institute in Kiev.

UkrPromInvest grew rapidly during the 1990s and formed the financial power-base for Petro Poroshenko’s later endeavors. The activities branched out from confectionery and automotive to include shipyards, media companies, and more.

In 1998, Petro Poroshenko won a seat in the Ukrainian Parliament (Verkovna Rada) for the 12th single-mandate constituency and resigned from his position as director-general of UkrPromInvest.

Maryna is a cardiologist. She was a student at the Bogomolets National Medical University when she met Petro at a disco. She worked as a cardiologist at the Zhovtneva Hospital until the birth of their first son.

Poroshenko is a member of the Ukrainian Orthodox Church. He often wears a visible crucifix during high-level meetings, and has financed the restoration of monasteries.

Petro Poroshenko and his family live in their private home in the historic neighborhood of Koncha-Zaspa in southern Kiev.

In 1997, Petro Poroshenko’s older brother (by eight years) died in a car accident under suspicious circumstances.